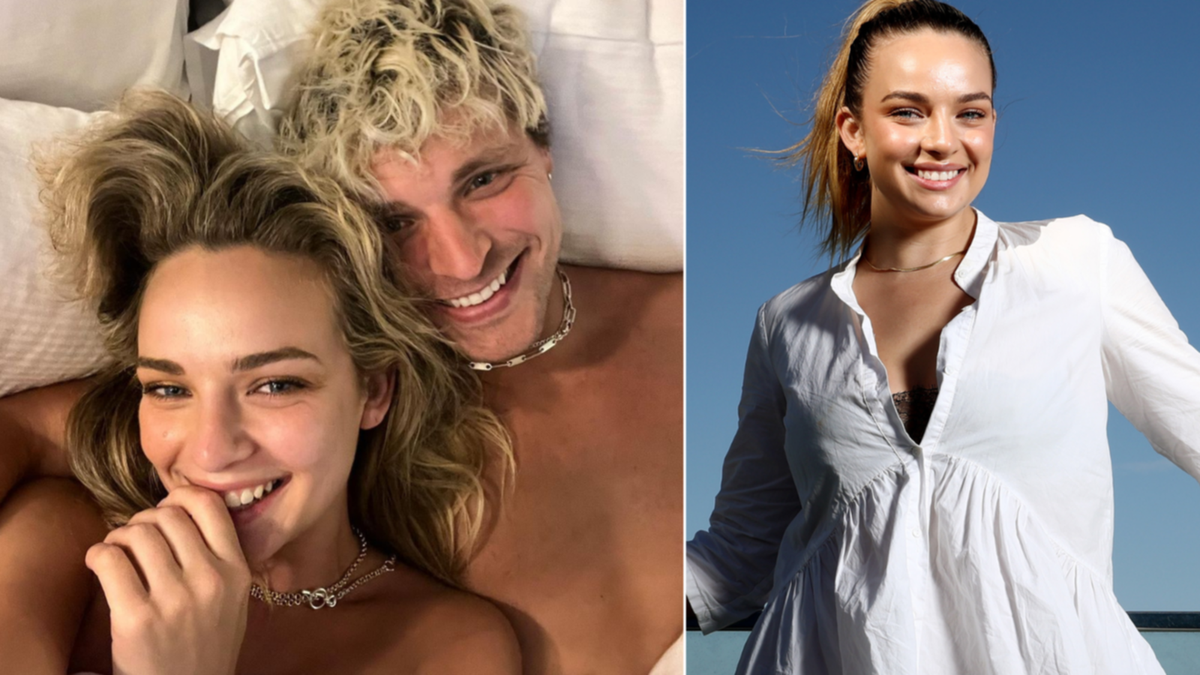 Podcaster Abbie Chatfield and her reality TV star boyfriend Konrad Bien-Stephen have shared that they are in an open relationship.

The announcement was met with such extreme backlash that Abbie has taken to her Instagram stories and radio show, telling followers to “get a grip”.

WATCH IN THE VIDEO ABOVE: Abbie Chatfield shares she’s in an open relationship

The couple, who met late last year, spoke candidly on Abbie’s podcast It’s a Lot, doing a Q&A with her listeners.

One question asked about the structure of their relationship, prompting Abbie to reveal they’re in an open relationship.

“First of all, we’re in love. Mummy and daddy aren’t breaking up … We’re just having a different structure to our relationship,” Abbie began.

“So we’re open. We’re in an open relationship, which we love,” the former TV star said.

Adding his thoughts on the matter, Konrad said: “I’ve never been in an open relationship before. But it’s something I want to explore and I want to navigate and learn.

“Someone we met on the weekend gave us some good tips. Go see a sex therapist, talk about what your boundaries are … Because it’s not like you can just go sleep with anyone,” he added.

Diving deeper, Abbie explained that “there are rules” to the open relationship and they “can still cheat on each other”.

Rules that stood out were that they are unable to sleep with their ex-partners or people they know and can only sleep with people once.

As an example of how the open relationship works, Konrad mentioned a time in the last few months when he did sleep with someone else, explaining he called Abbie the next day.

“She was like, ‘Yeah hot, tell me all about it’,” Konrad commented.

Both Abbie and Konrad went on to share this snippet of their podcast on both their socials, prompting an unexpected swirl of backlash from followers.

Taking to her Instagram stories to call out the haters directly, Abbie said: “Some of you f****** are so embarrassingly triggered because you’re so insecure, you’re like ‘but if you love someone’, not me, not him,” she said.

According to Abbie, lots of followers privately sent her an Instagram direct message, assuming that she must have “forced” Konrad into the agreement, arguing that he looked “uncomfortable” in the video clip.

Abbie is refreshingly known for being open with her sexuality online, something some followers appear to have misinterpreted.

“Like babes, I’m not forcing him to do anything, in fact, he’s the one that f***** someone else and I’m yet to because I am too busy,” Abbie said to shut down the comments.

“But like, it’s fine. We also didn’t only become open today… we’ve been open the whole time. We just didn’t want to tell you because you’re all psycho and this is how you react,” Abbie said.

“Why does it affect you which genitals touch each other? Get a grip,” Abbie said.

Abbie continued to defend open relationships later in the day when she spoke on her radio show Hot Nights with Abbie Chatfield.

Asking the question perhaps a lot of listeners were thinking, co-host Rohan Edwards asked Abbie: “Are you not worried that he would meet someone else and get the feelings?”

“Well if he does then we shouldn’t be together,” the former reality TV star responded.

Abbie and Konrad first started dating in late 2021 after being introduced by a mutual friend in Bryon Bay.

They are both former reality TV stars and now Abbie has a career in media, podcasting, and radio. Konrad meanwhile is a tradie.

The lovebirds are currently doing long-distance and have plans for Konrad to move to Sydney soon.