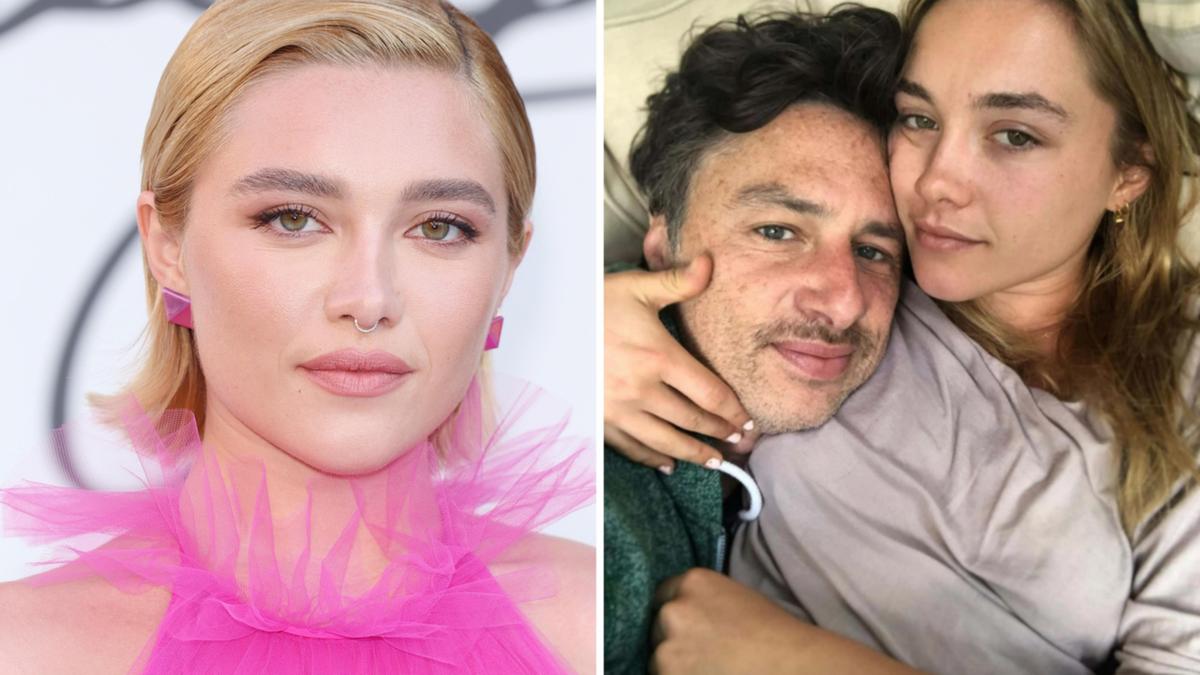 Florence Pugh has revealed she and boyfriend Zach Braff quietly broke up early in 2022 “without the world knowing”.

Throughout their three years of dating, the relationship was often met with harsh commentary, particularly around their 21-year age gap.

WATCH THE VIDEO ABOVE: Florence Pugh calls out fans criticising her relationship

“We’ve been trying to do this separation without the world knowing because it’s been a relationship that everybody has an opinion on,” Pugh, 26, told Harper’s Bazaar.

“We just felt something like this would really do us the benefit of not having millions of people telling us how happy they are that we’re not together.

“So we’ve done that. I automatically get a lumpy throat when I talk about it.”

The Don’t Worry Darling actress also spoke out about the intense focus on her personal life that comes with her career as a celebrity.

“Whenever I feel like that line has been crossed in my life, whether it’s paparazzi taking private moments or moments that aren’t even real … I think it’s incredibly wrong,” she said.

“We haven’t signed up for a reality TV show,” the Oscar nominee added.

Pugh has previously called out social media users who have criticised her relationship with Braff.

In 2020, the 26-year-old said in an Instagram video that she received comments “hurling abuse and being horrid – basically bullying someone on my page”.

“It is the first time in my entire Instagram life that I’ve had to turn off the comments on my page,” the Little Women actress said.

Meanwhile, Pugh’s highly anticipated film Don’t Worry Darling, in which she stars alongside singer Harry Styles, is due for release next month.

Ahead of the sexually charged film’s release, Pugh said she is refusing to discuss the sex scenes with “the most famous popstar in the world”, Styles, because that is not why she’s an actress.

The 26-year-old said the movie is “bigger and better than that”.

Pugh’s Harper’s Bazaar comments follow reports that she was unhappy with Styles’ and the film’s director Olivia Wilde’s on-set romance.

According to multiple reports, Pugh did not support Styles and Wilde’s blossoming friendship during filming.

That’s considering Wilde was still married to Jason Sudeikis, 46, with whom she shares two children.

“I can tell you for a fact that Flo, seeing Olivia and Harry all over each other on set, did not go down well as Olivia was still with Jason when she first hooked up with Harry,” a source told Page Six.

“Jason and the kids visited Olivia on set at the beginning a few times, so I think this all made people feel a little uncomfortable.”

Fans seized on a telling clue that Pugh was “furious” with Wilde over the turn of events.

When the trailer for Don’t Worry Darling was released, Pugh failed to share it.

The film’s leading lady is known to be extremely supportive of her projects, posting every poster, trailer and press detail on her social media.

However, just after the trailer was released, she instead shared a poster for a different project, Oppenheimer, in which she plays a smaller role.

As Pugh’s unusual silence continued, Wilde “went into overdrive”, according to some Twitter users, posting a shout-out to Pugh on Instagram.

“Watching this woman work was such a f****** thrill! Cannot wait to show you more. @florencepugh @dontworrydarling,” Wilde said on July 22.

There was no response from Pugh.

As reports continued, Pugh finally promoted the upcoming film on her Instagram.

“Not everyone gets this opportunity…” she began her caption on Friday.

“Not long now! Only in theatres September 23rd #dontworrydarling.”

Don’t Worry Darling is a psychological thriller about a 1950s housewife (Pugh) whose reality begins to crack, revealing a disturbing truth underneath.

The film is set to be released in cinemas in September, after the press tour beginning at the Cannes Film Festival later this month.