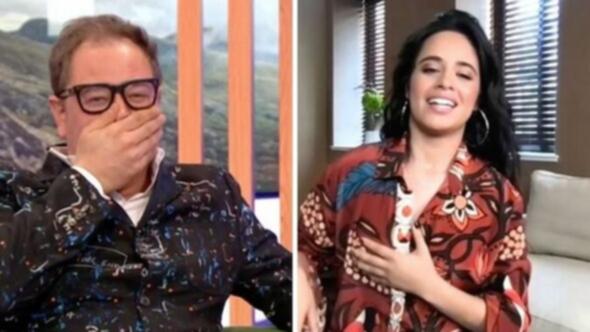 Camila Cabello has responded to her live television wardrobe malfunction on TikTok, joking that she should have taken her stylist’s offer to wear nipple covers under her outfit.

To promote the song, Cabello remotely appeared on The One Show on BBC and demonstrated her favourite dance moves from the music video.

For more Music related news and videos check out Music >>

“I actually undid one of my pants, because I just had a sandwich,” Cabello said, standing up in front of the camera and adjusting her clothing.

When she adjusted her shirt, she accidentally moved the fabric too far.

A seemingly unaware Cabello continued to demonstrate the dance.

“I hope you didn’t see nipple,” she said, sitting down after she finished dancing.

“There was a wardrobe malfunction,” co-host Alex Jones responded.

“There was a flash of something, I don’t know what I saw.”

Cabello addressed the slip-up on TikTok, lip syncing, “I wish I had a time machine” from a Muni Long song.

She captioned the video, “When my stylist asked me if I wanted nip covers and I said no”.

The commenters tried to reassure her.

“It’s okay the right one is still a secret,” one TikTok user replied.

Another said, “We will never forget but we will respectfully look away.”