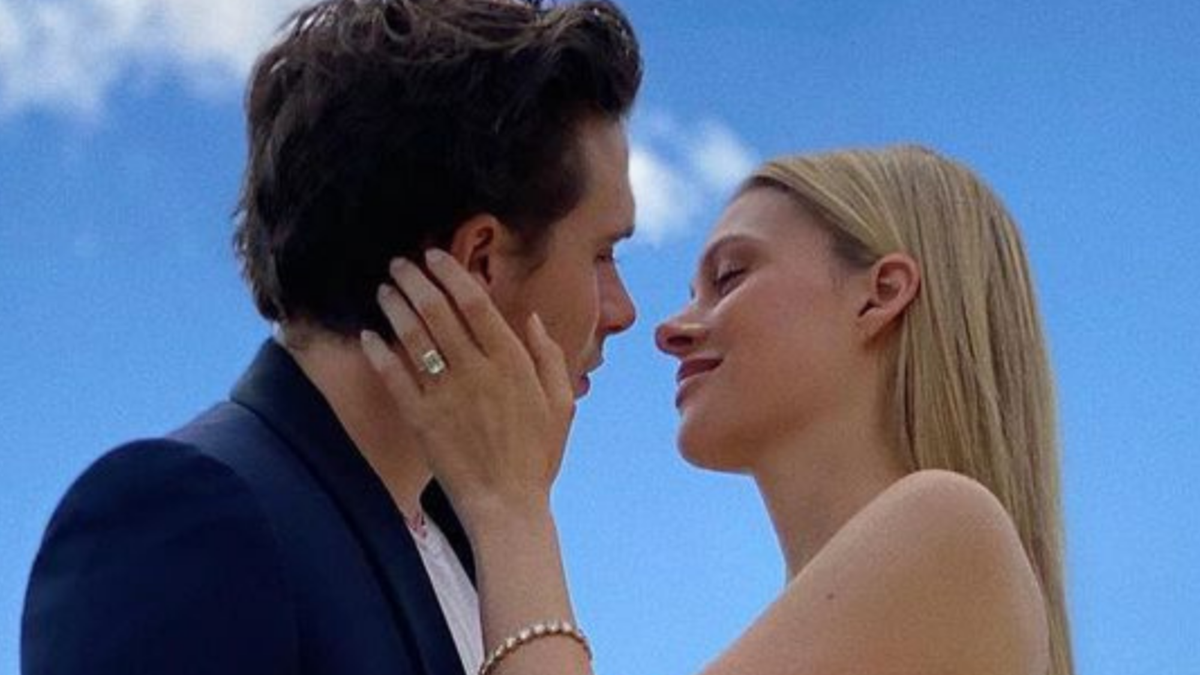 David and Victoria Beckham’s eldest son has married his longtime love in a lavish $A5 million wedding – extending over three days.

Brooklyn Beckham, 23, tied the knot with billionaire heiress and actress, Nicola Peltz, 27, at her family’s $A132 million oceanfront estate in Palm Beach, Florida.

Proud father David gave what’s been described as a “sweet speech”, in which the former soccer star teared up as he revealed the actions he took to protect Brooklyn when his son was a newborn.

One recognised Nicola’s mum Claudia’s Catholic faith, while the second Judaism ceremony was for her billionaire dad Nelson, 79.

Prior to the wedding, Brooklyn was seen driving in a golf buggy wearing white pyjamas and holding the couple’s bichon frise dog, Label.

As the family prepared for the big day, planning was ongoing at the reception venue.

Musicians could be heard playing salsa music prior to the 4.30pm start, The Sun reports.

A reportedly nervous-looking Brooklyn then arrived, accompanied by his groomsmen brothers Romeo, 19, and Cruz, 17.

Nicola walked down the aisle in one of her three wedding dresses, designed by Pierpaolo Piccioli, creative director of Italian fashion house Valentino.

Following the ceremony, guests were served bottomless Bollinger champagne in an oceanside marquee.

David Beckham gave a “sweet speech” celebrating the newlyweds, and appeared to be teary at one stage, reported The Sun.

“David’s speech went on for about five minutes and he looked to shed a tear at one point,” a source told the outlet.

“He was talking about when Brooklyn was born and how he wanted to protect him.

“He said he was sleeping on the hospital floor, holding the door shut because he didn’t want to let anyone get in.”

The source added that the former soccer star had to “take a breather to regain his composure”.

“But it was a very sweet speech,” the source said.

Others reported to be on the guestlist were singer Mel B, Prince Harry and Meghan Markle, models Gigi Hadid and Sofia Richie, and TV personality Nicole Richie.

Nicola’s brother and Man of Honour, Brad, joked during his speech, “Welcome to the family. Rule Number One: Happy wife, happy life,” a source told The Sun.

Romeo Beckham’s girlfriend Mia Regan, 19, appears to have broken the wedding’s strict no-phones rule during the evening, posting a photo of the couple in their outfits.

Ahead of the wedding, Victoria shared an Instagram post of David with their three other children, Romeo, Cruz, and Harper in Miami.

“An exciting weekend ahead of us! Kisses from Miami,” she wrote.

The three days of celebration ended with a brunch for guests at the bride’s family’s Palm Beach estate.

Brooklyn and Nicola became engaged in early 2020, less than a year after they started dating.

“I am the luckiest man in the world,” he captioned the engagement announcement.

“I promise to be the best husband and the best daddy one day. I love you, baby.”

The couple has been very public about their love, sharing with Vogue that they wear each other’s plated wisdom teeth on a necklace chain.

They are living in Beverly Hills in a house they moved into once engaged.

Chrissy Teigen shares health update: ‘So much better with that’