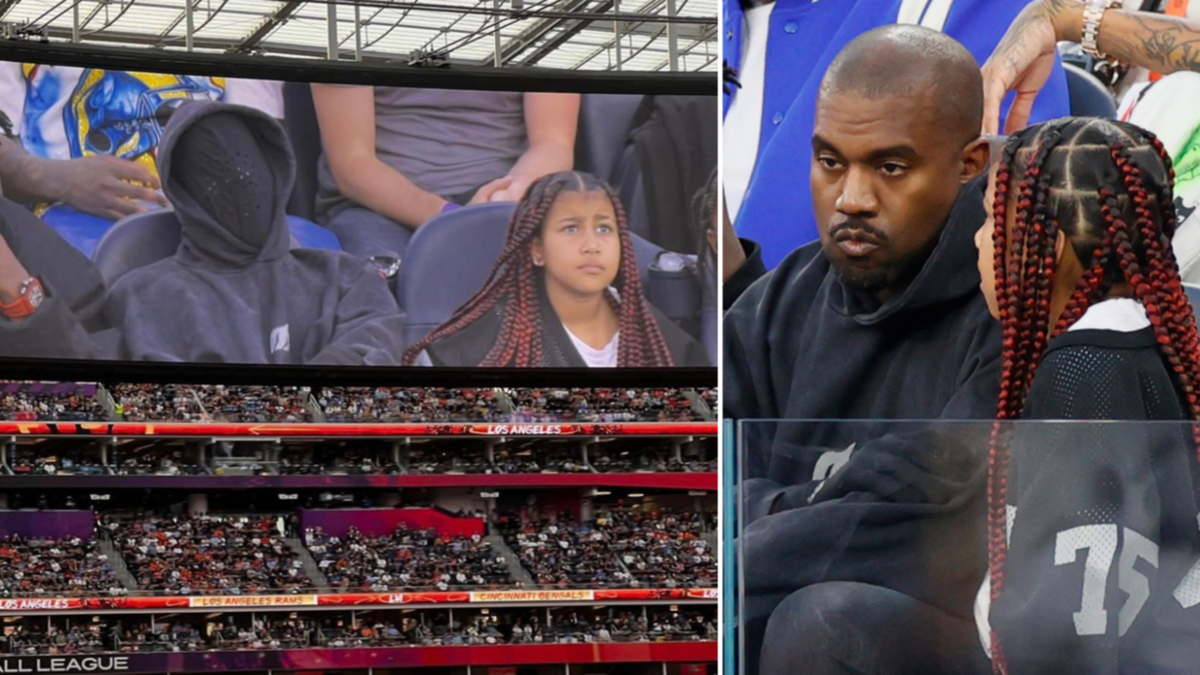 Celebrities all across the Super Bowl stadium were cheered when spotted by fans on the jumbo screen.

But when Kanye West appeared, he was met with an entirely different reaction – he was booed by fans across the stadium.

The Donda rapper was attending the annual event along with his two eldest children, North, 8, and Saint, 6, who he shares with estranged wife Kim Kardashian.

As is typically done to entertain the crowd, the jumbo screen often panned to famous faces in the audience.

The audience erupted with cheers as they spotted Kendall Jenner, Justin Bieber, Rebel Wilson and The Rock – to name just a few.

But when the camera panned to the rapper and his family, the reaction was quite different.

Spectators could be heard booing the performer who was dressed in all black, including a black mask that completely covered his face.

Despite some of his rap peers performing the half-time show, Kanye did not look too thrilled by the event, eventually removing his mask to reveal his unamused expression.

They performed a rendition of their greatest hits on top of an all-white set unlike any a Super Bowl stadium has seen before.

This is the first time Kanye has been spotted publicly since he released private family messages condemning his ex Kim’s decision to allow their daughter North to use TikTok.

All three posts were captioned in all capital letters with no full stops.

During one post, Kanye alleged a cousin of Kim’s had agreed with his stance on TikTok before asking “for some Yeezys afterwards”.

“I do this for every parent on either side whose kids’ futures are being one sidedly controlled,” Kanye went on.

“I don’t even have the right to get angry as a father without being called erratic,” Kanye added.

“I gave that family the culture – if they as a whole unit keep playing games with me, I will take that culture back.

“A father should never have to beg for the location of their children.”

Kanye appeared to be referring to his eight-year-old daughter’s TikTok account @kimandnorth, which went viral in December after North captured Kim in an awkward moment.

In another post, Kanye claimed: “Kim accused me of putting a hit out on her”, alongside a message to an unknown receiver that said, “send me Kim’s number”.

Days prior, Kim made a statement herself on Instagram.

“Kanye’s constant attacks on me in interviews and on social media is actually more hurtful than any TikTok North might create,” she began.

“As the parent who is the main provider and caregiver for our children, I am doing my best to protect our daughter while also allowing her to express her creativity in the medium that she wishes with adult supervision — because it brings her so much happiness.

“Divorce is difficult enough on our children and Kanye’s obsession with trying to control and manipulate our situation so negatively and publicly is only causing further pain for all,” the statement continued.

“From the beginning, I have wanted nothing but a healthy and supportive co-parenting relationship because it is what is best for our children and it saddens me that Kanye continues to make it impossible every step of the way.

“I wish to handle all matters regarding our children privately and hopefully he can finally respond to the third attorney he has had in the last year to resolve any issues amicably,” the Skims founder ended her statement.

In response, Kanye reposted a since-deleted screenshot of Kim’s statement to his own Instagram.

“What do you mean by main provider? America saw you try to kidnap my daughter on her birthday by not providing the address,” Kanye wrote.

Kim’s statement came as a result of Kanye sharing the TikTok regulations for users under 13 years old on his Instagram.

The regulations state that younger users should be put on TikTok’s younger user experience.

This experience, which North’s account @kimandnorth is not currently in, is designed to have additional privacy and safety protections.

Currently, @kimandnorth remains in mainstream TikTok as it is a joint account with Kim and is mainly controlled by her.

Along with North, Kim and Kanye have three other children, Saint, six, Chicago, four, and Psalm, two.