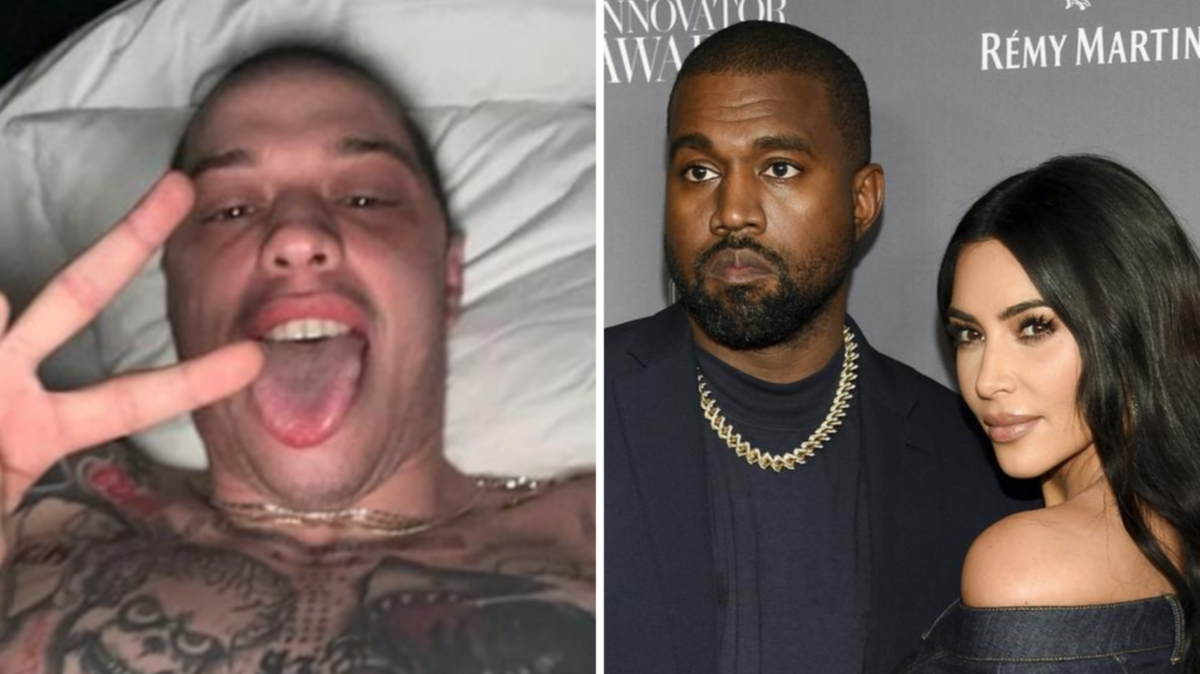 The saga between Kanye West and Pete Davidson continues.

On Sunday, March 13, the rapper posted and since deleted nearly four-minute long video on Instagram with the caption: “Saying a prayer that my children can come to Sunday Service.”

WATCH IN THE VIDEO ABOVE: Kim Kardashian and Pete Davidson are ‘Instagram official’

In the clip, Kanye, 44, alleged that Pete, 28, sent him “antagonising” text messages about his relationship with his ex, Kim Kardashian.

“The boyfriend text me, antagonising me, bragging about being in bed with my wife,” Kanye said.

“I thought publicly for a year and a half I’ve been dragged (about) how she’s not my wife.

“She doesn’t have my last name.

After months of dating rumours, Kim and the Saturday Night Live star finally made their relationship Instagram official on Friday.

“A message from Pete,” Sirus — a longtime friend of Pete’s who co-wrote his film King of Staten Island — wrote on Instagram alongside five screenshots of the alleged conversation.

Pete appeared to have texted Kanye first and said, “Yo it’s Skete,” referring to the derogatory name Kanye has repeatedly used for him.

“Can you please take a second and calm down.”

The comedian then complimented Kim for being “literally the best mother I’ve ever met. What she does for those kids is amazing and you are so f***ing lucky that she’s your kids mum.”

He acknowledged that he is no longer going to ignore Kanye’s public comments about him and Kim.

I’ve decided I’m not gonna let you treat us this way anymore and I’m done being quiet,” he wrote.

In one screenshot, Kanye allegedly replied and inquired about Pete’s location.

“In bed with your wife!” Pete responded, confirming the interaction Kanye mentioned in his Instagram video.

Pete also sent a picture of him lying in a bed, making a peace sign and sticking his tongue out.

Kanye commented, “Happy to see you’re out the hospital and rehab.”

Pete has been open in the past about his struggles with mental health.

The comedian said Kanye should “get help” offered to meet to discuss their problems.

He then wrote, “Your actions are so embarrassing,” and added, “It’s so sad to watch you ruin ur legacy on the daily.”

Kanye repeatedly offered to meet at his Sunday Service event but Pete said he preferred to hash things out “privately one on one.”

In the last two screenshots, Pete claimed he has stopped “SNL” — as well as other comedians — from joking about Kanye for months.

“I don’t want the father of my girls kids to look bad out there,” he said.

“I have your back even though you treat me like s*** because I want everything to be smooth.”

Pete’s final text said: “But if you continue to press me like you have for the past 6 months I’m gonna stop being nice.”

Their heated interaction comes a few weeks after Kim, who filed for divorce in February 2021, was declared legally single by a Los Angeles judge and removed West from her last name.

That same day, Kanye released a disturbing music video for his song Eazy that showed a claymation figure resembling Pete being kidnapped, bound and buried up to his neck.

A title card at the end of the video said, “Everyone lived happily ever after/Except Skete you know who/JK he’s fine.”

TODAY has reached out to reps for both Kanye and Pete and we will update this post if we hear back.

Kim Kardashian slammed for ‘tone-deaf’ and ‘offensive’ advice for women