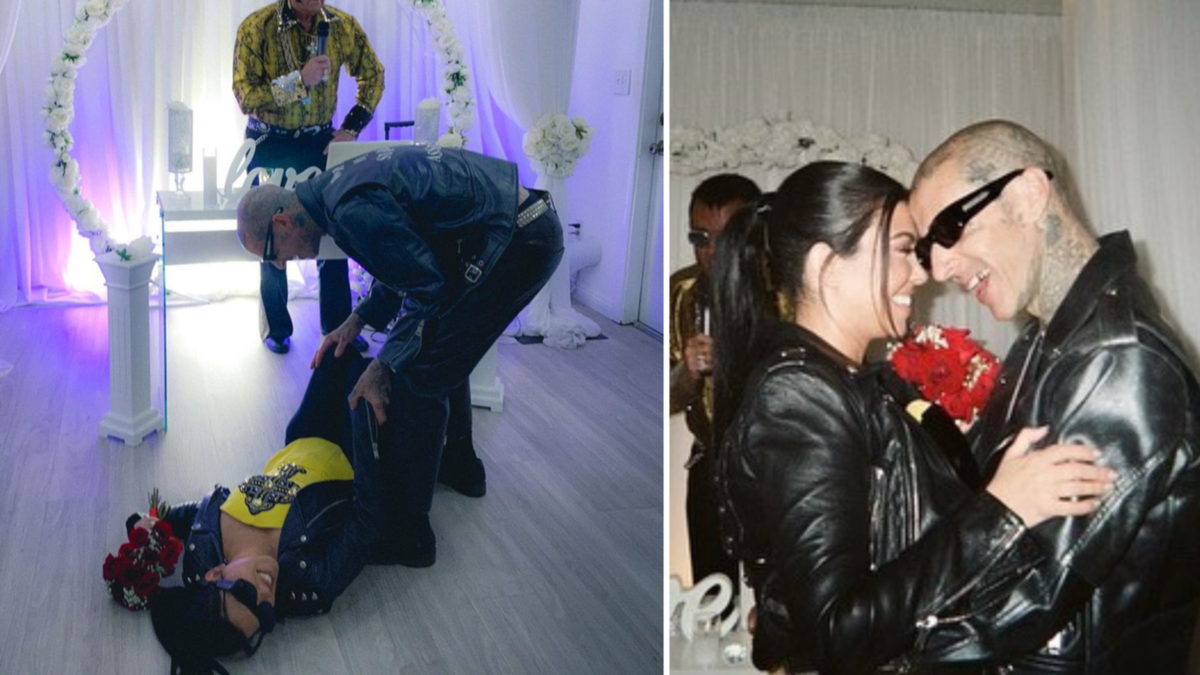 A day after reports surfaced that Kourtney Kardashian and Travis Barker were married, the couple has said it was simply a “practice”.

Both Kourtney and Travis have shared a series of candid pictures of their “practice” wedding in Vegas, revealing it was a product of an “epic night and a little tequila”.

Kourtney, 42, shared with her Instagram followers early on Thursday morning: “Found these in my camera roll.

“Once upon a time in a land far, far away (Las Vegas) at 2am, after an epic night and a little tequila, a queen and her handsome king ventured out to the only open chapel with an Elvis and got married (with no licence).

The Poosh founder posted 10 photos of the couple looking happy as they kissed and celebrated in the chapel.

You can’t have a Vegas wedding without Elvis Presley, and the Kardashian-Barker ‘wedding’ was no exception.

Behind Kourtney and Travis, 46, was an Elvis impersonator who officiated.

Travis later posted on Instagram another two photos of the pair, with the caption: “What happens in Vegas”.

Kourtney could be seen on the floor laughing as Travis bends down over her, presumably to pull her back up.

The reality star commented on her fiancé’s post, “best night of my life”.

After the couple left the One Love Wedding Chapel on Wednesday, they were spotted arriving at the Wynn Hotel in Las Vegas.

Of the spontaneous ceremony, chapel owner Marty Frierson told People: “I didn’t know who it was until they pulled up.”

Marty said the ‘wedding’ party was a total of four people, with the guests documenting the moment on their phones.

“There was a lot of … kissing and hugging. They barely came up for air! They just seemed totally in love,” he said.

The One Love Wedding Chapel is 10km from where the Grammys took place at the MGM Grand Garden Arena.

Kourtney and Travis were engaged in October 2021.

During a proposal on Montecito beach in California, the couple was surrounded by roses that spelled out their initials K and T.

Major move in lead up to Brooklyn Beckham’s $5.2 million wedding