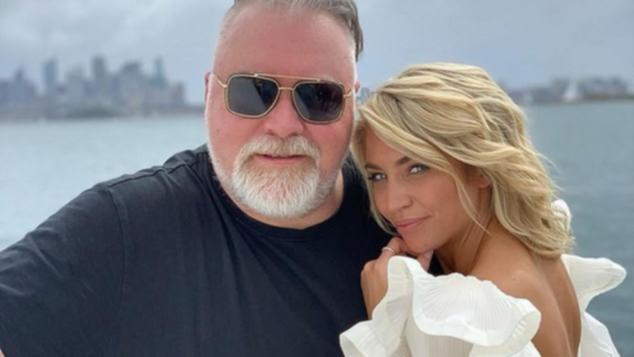 Kyle Sandilands has revealed the name he and fiancée Tegan Kynaston have provisionally chosen for their baby boy.

On the Kyle and Jackie O Show on Thursday, the shock jock was responding to a suggestion from his co-host Jackie O that her daughter and his son might one day host their own radio show.

LISTEN IN THE VIDEO ABOVE: Kyle Sandilands reveals name chosen for baby boy

Jackie’s daughter is Catalina Mae Henderson, but is known as Kitty.

“It’s the Kitty and whatever you’re gonna call your kid show,” Jackie said.

At which point Kyle said one word – “Otto”.

“Yeah, that’s what we’re going to call him,” Kyle declared.

“I don’t think it’s gone down well with the family.

Kyle continued, ”My auntie Jill went, ‘Oh what sort of stupid name’s that’.”

Jackie responded to assure him that she “liked it”.

Jackie went on to say that she had named her daughter Catalina, which happens to be a restaurant in Sydney’s Rose Bay.

If Kyle and Tegan were to opt for Otto, his son would also share a name with a Sydney eatery – Otto’s Italian restaurant in Woolloomooloo.

Kyle’s revelation of a name choice is the latest in a series of big announcements about his baby.

In February, the gender was revealed live on air from the middle of Sydney harbour.

Pictures were shared of the four-tier gender reveal cake, ‘baby Sandilands’ decor, an elaborate candy bar – all in shades of blue and pink.

The gender was announced by planes that flew over their boat spewing blue smoke.

“We did expect a girl but we’re very, very happy,” Kyle said afterwards.

“He’s been very emotional … very happy about it,” she said.