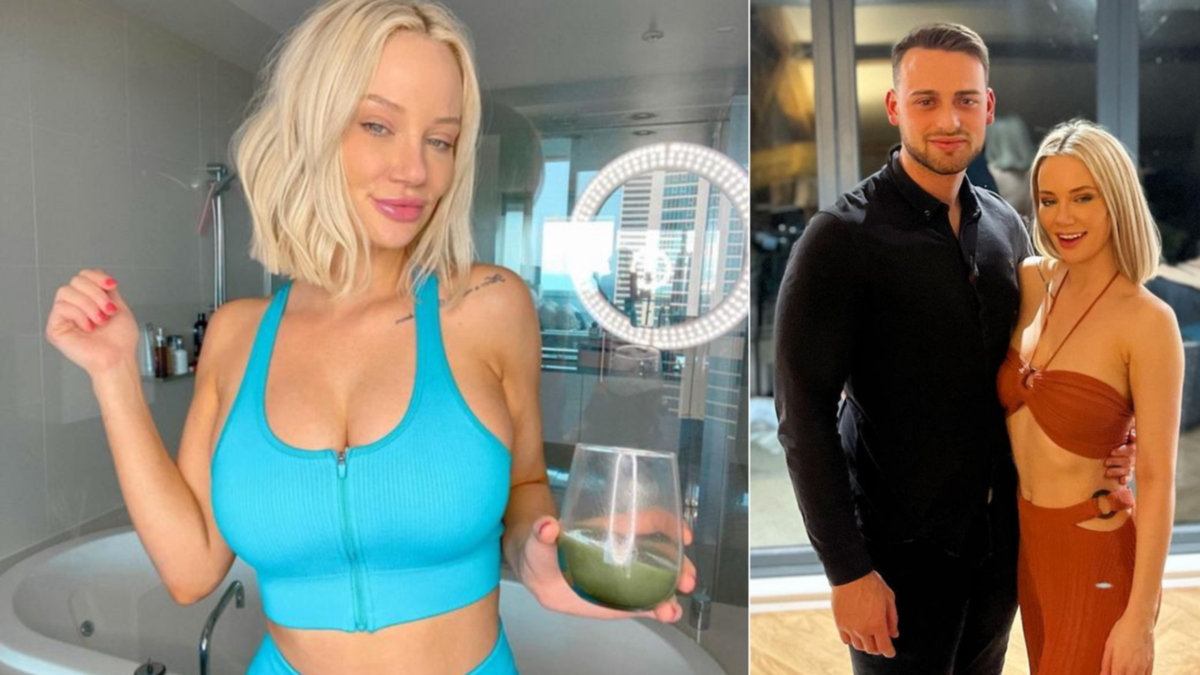 An Australian reality TV star has been accused of ‘wasting everyone’s time’ after snagging a lucrative appearance on a British dating show.

Jessika Power, a contestant on Aussie shows including Big Brother VIP, reportedly moved to the UK in October to be with a man she met online, Connor Thompson.

WATCH IN THE VIDEO ABOVE: Jessika Power reveals her eye-watering monthly spending

But the pair reportedly split soon after, with Jessika then joining the UK reality show Celebs Go Dating in January.

Just weeks after filming wrapped, it seems the couple have moved in together.

Jessika – who was reportedly paid $73,000 for her stint on the dating show – made headlines for her move to the UK and for having a large presence on the adult-only site OnlyFans.

The 29 year old reportedly moved to Manchester in October to be with new boyfriend Connor Thompson, host of the podcast Erasing the Bar.

But a source told The Sun Jessika and Connor had broken up just days after Jess moved to Manchester, claiming it was then that she signed up for Celebs Go Dating.

Producers were reportedly keen to have Jessika as a contestant, on the back of her popularity on an Australian dating show.

Throughout the run of the British show, Jessika reportedly angered show bosses by travelling back and forth from London to Manchester during filming.

In January, she was spotted kissing Connor on the street, an action which could have jeopardised her Celebs Go Dating pay cheque.

Her contract stipulates she must be single throughout filming, according to a source from The Sun.

A source claimed: “Everyone thinks Jessika has been with Connor the whole time.

“She has now moved him into her apartment and they are no longer hiding their romance.

“Not surprisingly she didn’t meet anyone on the show.

Things look like they’re getting serious now for Jessika and Connor.

The couple has moved in together and adopted a new puppy, Sushi, who Jessika introduced to her Instagram followers last month.

“He’s a bit scared, we’re going to let him rest,” she wrote.

The reality star said Sushi was from a dog breeder in the UK with whom she is friends.

Jessika said she was excited to give her new four-legged friend “infinite puppy cuddles and kisses”.

WATCH IN THE VIDEO BELOW: Jessika Power shows off her new puppy named Sushi

This comes after The Daily Telegraph reported the Aussie star “leaves absolutely nothing to the imagination” on her OnlyFans page.

The subscription-based sex content platform, which allows users to purchase original content from creators, has a large following.

Jessika claimed on Instagram that in her first four months on the platform she made $280,000.

The article refers to a particular post on her profile as being “too graphic to describe”, with her account including a lot more than lingerie and bikini content.

She shared an Instagram post in August, when the controversy first started, explaining why she joined the site.

“I’m sharing more content on my other page and within the bounds of what I feel comfortable with,” Jessika said.

“I know everyone is going to have an adverse opinion on this and I never thought I’d see myself on this app.

“But if I can create a better life for myself and my family through an app why the hell wouldn’t I?!”