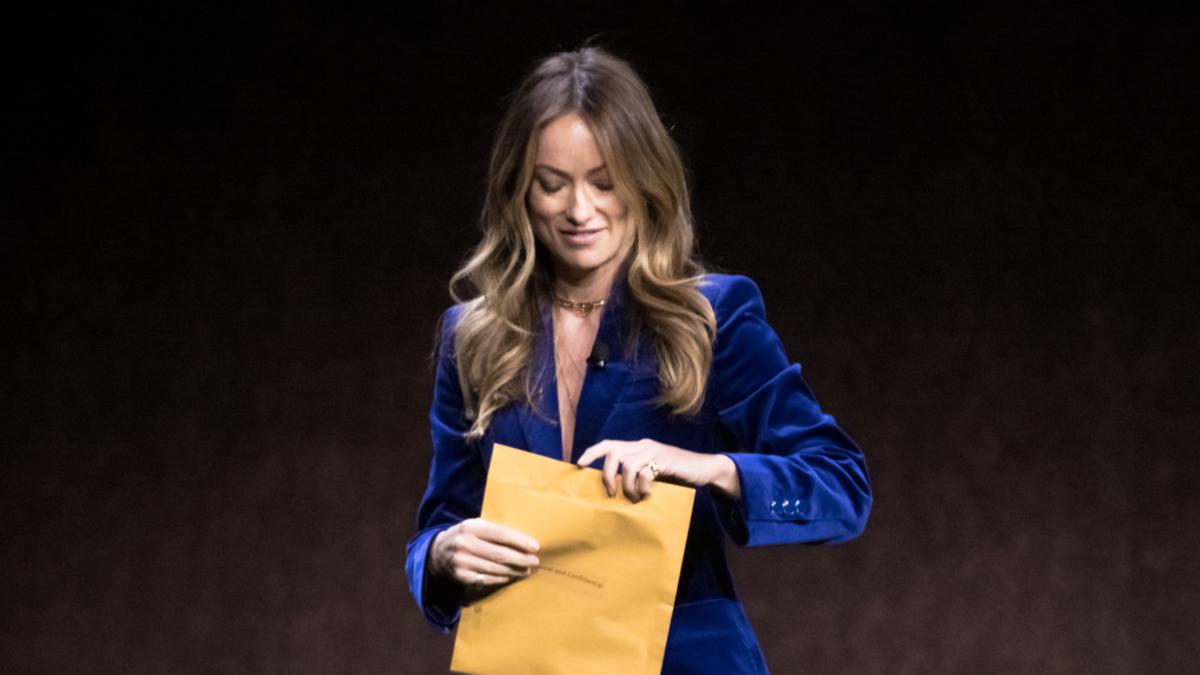 Olivia Wilde has been served with legal papers while speaking on stage in front of a packed crowd at a film conference.

The Hollywood actress and director was handed a brown envelope while promoting her new movie, Don’t Worry Darling, at CinemaCon in Las Vegas on Thursday.

See the moment she was served in the video player above

The envelope reportedly contained court papers filed by ex-fiancé Jason Sudeikis amid a custody battle over their two children.

Wilde ended her seven-year relationship with the Ted Lasso actor in November 2020.

She was reportedly handed the delivery by a woman who slid it on stage in the middle of the presentation.

“This is for me?” a stunned Wilde asked, according to members of the 4000-strong audience.

According to Variety, 46-year-old Sudeikis “had no prior knowledge” about where and when the papers would be served to his ex.

“Papers were drawn up to establish jurisdiction relating to the children of Ms Wilde and Mr Sudeikis,” a source told the publication.

According to the source, Sudeikis is appalled by how the papers were delivered and “would never condone her being served in such an inappropriate manner”.

The head of CinemaCon, Mitch Neuhauser, the managing director of the National Association of Theatre Owners, said in a statement that organizers will re-evaluate their security protocols.

“We have never in the history of the convention had an incident where a delegate has approached the stage who was not authorised to be there,” Neuhauser said.

“In light of this incident, we are reevaluating our security procedures to ensure the safety of all our attendees.”

Wilde and Sudeikis have not publicly commented on the matter.

Wilde, however, did post a still image on her Instagram account of the coming movie she directed, which stars her boyfriend, Harry Styles, and Florence Pugh.

Wilde, 38, is currently dating the former One Direction singer, who is ten years her junior.

The pair met on the set of Don’t Worry Darling and announced their relationship just months after Wilde and Sudeikis’ split was confirmed.

The breakup of Wilde and Sudeikis was pretty public for the former couple who met in 2011.

For his part Sudeikis sounds like he’s trying to grow from it.

“That’s an experience that you either learn from or make excuses about,” he told GQ magazine in 2021.

“You take some responsibility for it, hold yourself accountable for what you do, but then also endeavor to learn something beyond the obvious from it.”

Happily married couple explains why they are sleeping in separate bedrooms